Fintech innovators in Canada are enjoying their best year ever, having overcome the shocks of Covid-19. The coronavirus only seems to have whetted the Great White North’s appetite for disruption in its financial services. However, when the pandemic first hit, few dared believe the global contagion would benefit the nation’s fintech entrepreneurs.

“We didn’t know or understand what the future was gonna hold both short term and long term,” Gillani tells Verdict about those first months in 2020 when the virus swept across the globe.

His and Luge Capital’s response was to pause their outgoing deals, to help their portfolio startups better manage cash flows and to try to understand what the pandemic would mean for them.

They were not alone. Entrepreneurs, investors and other stakeholders in the Canadian fintech industry all prepared themselves for a hard year, not knowing what the pandemic would mean on both a professional and a personal level.

Their concerns proved well-founded. The fintech investment figures from 2020 are bleak. As the contagion’s casualties compounded, many Canadian investors kept their chequebooks closed and left cash-strapped startups to fend for themselves.

Consequently, the amount of cash injected into the nation’s fintech scene dropped from the record $1.6bn recorded in 2019 to $608.5m in 2020, according to FinTech Global.

At the same time, the number of new startups being launched in the Great White North plunged. Of the 700 fintech companies that count Canada as their home, only 18 were founded last year, according to Accenture. That’s down from the 43 launched in 2019.

However, things aren’t as bleak as those figures may suggest.

Canada: a fintech nation on the rise

Once the initial shock of the pandemic had subsided, investors and other market shareholders noted that the coronavirus actually benefited the sector.

With that in mind, Luge Capital started to invest more heavily in new startups at the end of 2020 and the beginning of 2021.

“We were looking at more and more companies and doing deals faster and faster,” he recalls. “Our volume picked up in Q4 and then we started off 2021 by closing three deals in a matter of 45 days.”

Luge was hardly unique in doing so. Data from GlobalData’s Deals database suggests that there have been 47 VC deals worth a total of $2.1bn so far this year in the Canadian financial services industry. Of those, the heaviest investment has been seen in financial services firms’ ecommerce investments, with $1.19bn being put towards that end. Unsurprisingly, digitalisation, digital media and big data also enjoyed massive investment. 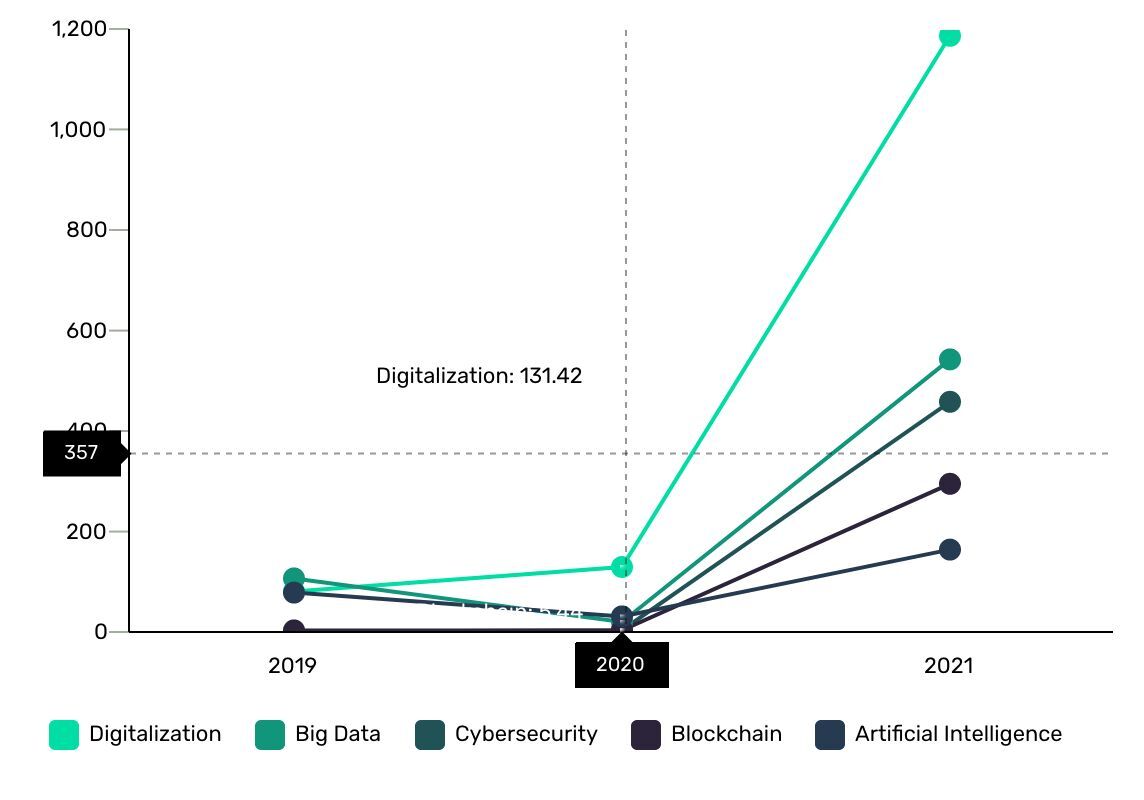 The country’s fintech sector is heading towards a new record year for the same reason industry stakeholders worried last year: the coronavirus. While it caused a lot of hurt, the pandemic has accelerated ecommerce and the digitisation of the Canadian fintech industry.

Canada is a highly developed nation, but that’s also what’s been holding it back. Though this may sound counter-intuitive, it’s really not as odd as it may seem.

Having a highly developed infrastructure of any kind – whether that’s payments, telephone coverage or broadband – means that replacing it becomes costly, especially if people are happy to get by with what’s already there.

If country doesn’t have that infrastructure and reaches a level of prosperity or development where people expect similar services like the ones they have in developed countries, then it’s much easier to introduce cutting-edge tech and skip more traditional solutions.

Payment cards and mobile wallets are clear examples of this. While customers in nations like China and India have heavily adopted mobile wallets, Canadians have so far not done so to any massive extent, as noted in recent GlobalData research report on the nation’s payment market.

“With the pace of technological development in payments over the past couple of decades, you could characterise Canada as being behind the curve while still being mature [in terms] of electronic payments,” Sam Murrant, lead analyst of payments at GlobalData, tells Verdict.

Developed nations like Canada have long been using cards for things instead of carrying around cash. Payment cards didn’t catch on to the same extent in emerging countries. However, the arrival of smartphones has enabled those nations to leapfrog cards and go directly into using mobile payments.

Things are changing in the Great White North. Canadians are increasingly adopting new payment technologies. The pandemic has seen a $110.8% jump in the nation’s online shopping, the usage of buy-now-pay-later services like the ones offered by Affirm, and contactless payments with mobile wallets like Google Pay and Apple Pay.

These changes have been encouraged by the government, which increased the contactless spending limit from C$100 to C$250 a month into the pandemic.

A Payments Canada study found that 62% of Canadians were using less cash than they did pre-pandemic, with 53% using card or mobile payments for in-store purchases and 42% of respondents actively avoiding shopping at places that do not accept contactless payments, partly out of fear that they’d catch the coronavirus by paying with physical money.

Cash transactions have consequently declined from 5.8 billion transactions in 2016 to 3.3 billion in 2020 due to the prevalence of electronic payment services and because of Covid-19, as noted by the GlobalData report.

Fintechs are benefiting from Canadians’ – both consumers’ and businesses’ – new taste for digital payments.

“One of the big things that we’re seeing in the B2B world, is the faster eradication of cheque payments, which is not a particularly sexy industry but a huge and important one,” Gillani says. “There’s something like $25tn moved between businesses every year in the United States. And a huge portion of that traditionally has been paper cheques.”

For the startups providing those kind of B2B payment services, this can prove a big boon.

The usage of cheques and cash could crash even more in 2022. That’s when Canada will launch a new real time payment system. The so-called Real-Time Rail will empower people and businesses to make final and irrevocable payments around the clock, letting them tap into more efficient payment alternatives than cash.

Murrant believes it can act as a “galvanising moment” for the industry. “There’s an opportunity to move away from cards and there’s plenty of support as well around the merchants side from the Canadian government through the Go Digital Canada initiative that was launched last year to bolster ecommerce,” he says.

Insurance is another area ripe for disruption. The trend over the past few years in developed countries has seen digital first insurance companies or insurtech firms helping incumbent players digitalise their services with things like AI-powered underwriting. This sector has picked up speed thanks to the coronavirus, both in Canada and in the rest of the world.

“Younger generation – the millennials and Gen Xers – who are now adults, have not typically made buying insurance a high priority, particularly life and health insurance,” Gillani says. “And Covid has been a huge awareness-driver for ensuring you’re properly insured. This is a tech savvy generation – the Netflix and the Disney+ generation. So they’re now looking to buy insurance, but they’re looking to do it in this sort of digitally enabled environment.”

Canada’s leading banks are also contributing to the tech transformation by utilising artificial intelligence (AI) to a higher degree. Thanks to the pandemic, they have been forced to invest in their remote channels as customers have been unable to visit physical branches. AI plays a massive part in that

Canada fintech and the future

It seems as if this push towards a more digitalised and mobile financial industry in the nation is set to last. Part of that is because Canada’s government has been busy of late overhauling the legal framework for the retail payments industry.

In May, it passed the second reading of “An Act Respecting Retail Payment Activities,” more commonly known as the “Retail Payment Activities Act.” The law aims to provide clear rules and to nurture innovation for payment processors, digital wallets, currency transfer services and other payment technology companies. The Bank of Canada will supervise the payments industry as part of the act.

Craig Asano, founder and CEO of the National Crowdfunding & Fintech Association of Canada, welcomes the central bank’s ambition to introduce new regulations in the payments space, but is still hesitant about how much impact it will really have. “Question remains: How much access will fintechs have to the system?” he asks.

Open banking is another key factor that could contribute to a flourishing fintech ecosystem in the Great White North. Open banking allows customers to decide who has access to their financial data, whether it’s their banks, insurance companies or startups. Being able to tap into that data is seen as a massive opportunity for startups.

Open banking is available in the UK, Australia and Europe. It is not available in Canada, yet. Again, though, things seem to be moving. In August, deputy prime minister Chrystia Freeland welcomed the final report from the advisory committee on open banking. The investigation had looked into whether or not Canada should follow in the UK*s footsteps. Canada is now set to introduce open banking in 2023.

All these things amount to a sense that the fintech community in Canada is about to emerge on a massive scale.

“Now is the time for Canadian founders to really succeed,” Gillani concludes.

Receive our newsletter Sign up to our e-Newsletter here